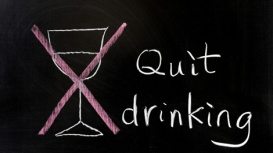 Alcohol, the cause of and solution to all of life’s problems. A suitable quote there from Homer Simpson. The relationship Irish people have with alcohol is a warped one and is no secret. We are forever referred to as the “drunken Irish” and more often than not we are well able to live up to that expectation. The centre of the Irish social scene is alcohol, it doesn’t even really matter what the context is. Whether it’s a birthday, a christening, a funeral, an anniversary or just a Friday night we associate alcohol with relaxing, with enjoyment and with socialising and the reality of that changing seems very far off.

Recently, I stopped drinking alcohol. Unlike in my early twenties when going out and getting drunk as quickly and as cheaply as possible was key, that is no longer a priority. My desire for alcohol has lessened considerably since the age of about 26 and certainly from 27 onward. So, the big question. Why? Why are you not drinking? The shock and horrified expressions on people’s face is enough to make you feel like you’re committing some kind of social sin. I’m no longer drinking alcohol because of my migraine. At the moment I’m on medication for it and that takes precedent. That started four months ago and truth be told I don’t even miss it. We seem to have a psychological attachment to alcohol and that if we’re not consuming it then we won’t be able to enjoy ourselves. I won’t lie and say that the first few times I went out and didn’t drink weren’t strange because it was an adjustment. You do feel a little out of sorts when the majority of people around you are drinking but now, I don’t find it that much of an issue at all. Non – alcoholic beer and mocktails offer a nice alternative that mean you don’t have to compromise on alcohol intake but you can still “fit in” for lack of a better description.

What annoys me most about the situation is that whatever people’s reasons are for not drinking, be that anti – biotics, financial, generally having an unhealthy relationship with alcohol or just not wanting to deal with the hangovers, it is just that, THEIR reason  and I don’t feel that the rest of us should need to know every detail. It can be uncomfortable for someone to have to justify their choice on something that really shouldn’t be any kind of an issue. At times even when you have explained your reason it doesn’t seem to be adequate. “So what if you’re on anti – biotics that just means a cheaper night out” has been one response that I’ve heard on numerous occasions.

When I do come off the medication for my migraine, will I make a swift return to drinking? Honestly, I don’t think that I will. I don’t miss the hangovers or the impact alcohol has on my body and mind nor do I miss the gaping hole in my bank balance so why bother? I think because we drink so extensively in our teens and early twenties in Ireland we almost don’t realise that we are capable of socialising without it and once you overcome that barrier, it really isn’t that big of a deal. Of course I might have a drink here and there but I think I can honestly say that my nights of heavy drinking will be staying with me only in my memory, or lack of memory probably in some cases.