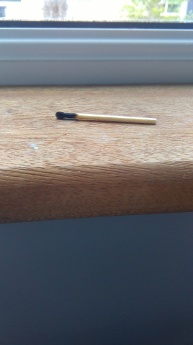 Perfume
There was something lingering in the air between them. Unspoken words, concerns they couldn’t bring themselves to share, fears they should have been able to communicate to each other but couldn’t. They had been in the room for almost two hours without so much as a glance to the others’ eyes, knowing that once they made contact they would have to think about it, have to respond. So, they didn’t. They sat in complete silence, one staring out the narrow window in the corner, the other at the ceiling examining each line and crack as if it were a work of art in the Vatican. A small burned out match lay on the window sill from the last time they shared the room together. The smell of her perfume tangled with the faintest of smoke. That combination was ethched into his mind. Startling him from his memories, there was a knock on the door. They were forced to leave their comfortable silence. He reached for her hand unsure of what response he would get. She wanted to hold on but she paused and walked out ahead of him. Once, she had willed him to reach for her hand but not now. There had been too many conversations left unfinished. He turned back and looked at the burned out match. How could something so small represent something so significant he wondered. Hesitantly, he forced himself to put one foot in front of the other and left the room all the while knowing that although he could walk out of there, he would never be able to forget what happened there.